It has been reported that Arsenal winger Alex Oxlade-Chamberlain is full of praise for Costa Rica striker Joel Campbell. 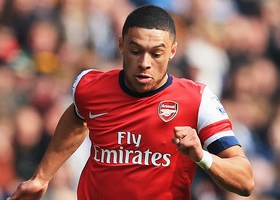 Campbell has won the Greek championship while on-loan with Olympiacos this season and will face the Ox’s England in the World Cup.

The 20 year old told RWD Football: “When he first came to Arsenal he trained with us for a week or two and then went off on loan. I saw a little bit of him and you know, he’s a big talent and he showed that against Man United with that goal he scored. I do know a little bit about him.

“There’s no doubt he’s got talent like a lot of players for Costa Rica have and everyone else in our group.”