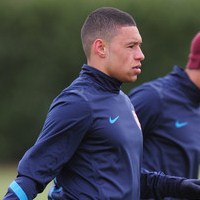 Alex Oxlade-Chamberlain has revealed that he now feels part of the furniture at Arsenal.

The former Southampton star has admitted that his run in the side has helped him settle into his new surroundings and the 18-year-old believes the only way is up.

“I think it’s gone really well in terms of bedding in with the boys and into the squad,” he told Arsenal.com.

“Not so much as a first-team regular as obviously as I am still young and there are lot of good players around me doing really well. ”

“I just feel part of the squad now, am really comfortable with all of the lads, the fans and feel a massive part of it.

“Maybe not so much now but I can see myself being a part of Arsenal’s future. That is where I would like to be anyway and I am going to work as hard as I can to make sure I achieve that.”

Ozil Did Not Look Confident – Ballack