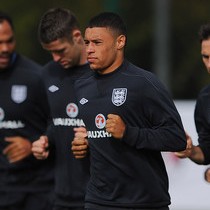 Arsenal youngster Alex Oxlade-Chamberlain has admitted that he is thrilled to be playing with Santi Cazorla.

The 19 year old England international winger declared that Cazorla has made a huge impact since his arrival.

He told Absolute Radio: “He’s just an amazing footballer, so he would be nice for anyone to play with, you can’t not like playing with someone like that. You get kind of Iniesta or Xavi, the kind of player that’s brilliant on the ball, but technically he’s really good, he scores goals, sets up goals and he’s just a brilliant footballer. We’re really happy to have him.”