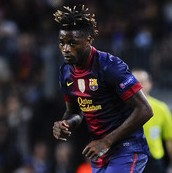 Daily Star reports that Cameroon star Alex Song, 25, who left the Gunners last summer for Barcelona in a £15million deal and has struggled to get first-team football is itching for a move back to The Emirates.

Song is ready to call time on his short spell at the Nou Camp and a move back to The Emirates would suit him and his family.

Wenger has failed to provide Arsenal with defensive midfield cover since Song’s departure but he will resist considering a bid for his former midfielder.

Wenger will reject Alex Song’s plea to return to Arsenal and instead redouble his efforts to land Celtic’s Victor Wanyama.