It has been reported that Alexander Buttner has confirmed he is set to leave Manchester United. 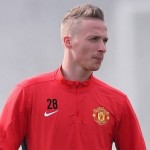 Reports suggest that the Dutch left-back is ready to sign for Dinamo Moscow.

The 25-year-old told De Telegraaf: “Van Gaal never gave me the chance in the Dutch national team, despite being voted man of the match 14 times at Manchester United.

“Apparently, he is not very confident about me. So I think this is the right moment to leave.”

“In the last two years van Gaal has ignored him again and again. What kind of outlook is that for him?”