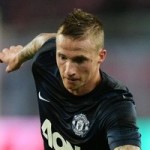 It has been reported that Manchester United defender Alexander Buttner is not worried by speculation linking Leighton Baines with a move to Old Trafford.

The 24 year old defender is understudy to first-choice left-back Patrice Evra but has no problems with added competition.

The Dutchman said: “The speculation doesn’t bother me. I hear the name Baines but for me I don’t care.

“I want to play my own game. If he comes I don’t think my future will be in danger.

“I just want to be strong and let the trainer see what I have got. I don’t think about other players, just myself.”