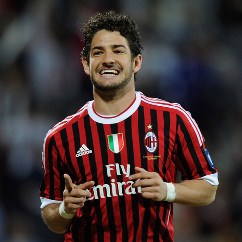 Alexandre Pato scored the match winning goal for AC Milan in the friendly match against French side PSG.

The Brazilian international scored the decisive goal just four minutes into the Dubai 1-0 result, which marked Carlo Ancelotti’s debut on the PSG bench.

Pato told Sky Sport Italia : “I am in good shape and only played half the game, but still feel fine,”.

The last few days have been full of speculation that PSG are planning a €45m January swoop for the Brazilian hitman, especially now Ancelotti has arrived.

“Before the game I said hello to Ancelotti, which was only right and normal, but we did not talk about a transfer to Paris Saint-Germain.

“Is my agent in Dubai? I don’t know, the media seem to know more about this than I do… I’m just happy to have scored and won the first game of 2012.” Riccardo Montolivo Expected To Join AC Milan In The Summer