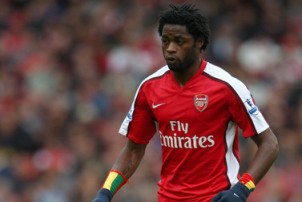 Great news for all Arsenal fans as midfielder Alexandre Song has agreed a new long-term deal at Arsenal.

Local news papers have reported that the Cameroon international midfielder will extend his current contract to 2015.

An Arsenal source revealed that the contract is a reward for all the player’s hard work.

The source also revealed that Song has earned a starting place and his workrate and application have been exemplary.

It was also revealed that this is an indication that the boss believes Song can form a key part of the Arsenal in the long term.

Gunners chief Arsene Wenger has kept faith in Song, now age 22, who he signed as a precocious talent four years ago from Bastia.

Song was sent out on loan to Charlton to gain first-team experience and has since grabbed his chance after Gilberto Silva and Mathieu Flamini left.