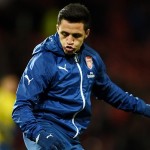 Reports are out claiming that Alexis Sanchez is delighted with the way he’s settled at Arsenal.

The former Barcelona star has been outstanding in his first season in England.

“I am well adapted to the country and the league,” Sanchez said.

“I must keep on learning, though. I want to expand my knowledge of English football in general and Arsenal and my teammates in particular, but overall I love this league.

“Here in the Premier League you can get beaten 3-0 by a team laying at the bottom of the table. It is not an unusual thing in English football.

“That is why any prediction ahead of the game may be very deceptive. Regardless of how good or bad the team you play against is, you can feel that there’s a huge crowd and pressure everywhere you go. I really like that.”