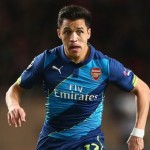 Reports are out claiming that Alexis Sanchez is delighted with his decision to move to Arsenal.

The former Barcelona and Udinese striker is loving life in London – and in the Premier League.

He said: “I’m well adapted to the country and the league now. I must keep on learning, though.

“I want to expand my knowledge of English football in general, and Arsenal and my team-mates in particular.

“But overall I love this league. At the end of the day, football was invented in this country, right?

“I live where football was ­invented. That makes me really happy.”