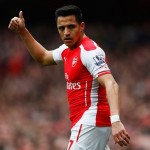 Reports are out claiming that former Arsenal striker Alan Smith believes Alexis Sanchez has been infectious for Arsene Wenger’s squad.

The Chile international star has brought scoring ability and a desire to compete to north London following his summer move from Barcelona and it has rubbed off in a positive way according to Smith who won two league titles, the FA Cup, the League Cup and the UEFA Cup Winners’ Cup during his time with the Gunners.

“Sanchez is the obvious one. With his work ethic as much as his talent and technique,” said Smith in the London Evening Standard.

“To see a player of his stature show such a hunger for the fight excites you. It’s had an effect on everyone. It’s great to see.

“If we lost the ball under George Graham we’d get a bollocking so we were always taught to funnel back and help the full-back but it’s great to see Sanchez battle and work so hard for the team.”

Sanchez has scored 20 goals in 44 outings in all competitions for Arsenal in his debut season at the Emirates Stadium.