Reports have emerged claiming that Arsenal are closing in on a new and improved contract for Alexis Sanchez. 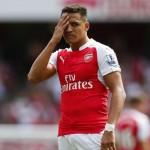 The Chile international and his representatives are in advanced talks with the Gunners over a deal that is set to land him £155,000-per-week, according to the Daily Mail.

26-year-old Sanchez has more than two years remaining on the deal he signed in the summer of 2014 when he joined Arsenal from Barcelona for £35million but the North London club are determined to tie him down for the future.

It is believed that Sanchez will sign a five-year deal before his current contract enters its final two years.

Since arriving at the Emirates Stadium, the former Udinese star has scored 32 goals in 69 appearances in all competitions for the Gunners.

Samir Nasri Out For THREE Months With Injury