Reports are out claiming that Santi Cazorla has hailed teammate Alexis Sanchez as one of the best players in the world. 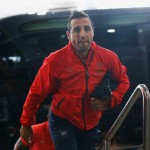 Alexis Sanchez was the star for Arsenal last season and the Chilean has continued his fine form during the current campaign, playing a key role in the Gunners’ fine start in the Premier League.

Speaking to the club’s official website, the Spanish international said: “He’s getting better every day, every year. There are no limits for him. The ambition he has right across the board is incredible and that enables him to improve with every passing day.

“We’re lucky to have Alexis with us – I’ve always said that. We hope he keeps that level up. He’s one of the best players in the world.” AS Roma Prepared To Turn Down Arsenal Approach For Kostas Manolas