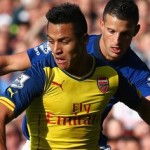 Reports are out claiming that Arsenal boss Arsene Wenger sees Alexis Sanchez in a central role.

The French tactician must find cover for the injured Olivier Giroud.

“Podolski can play there and Campbell if you ask what he is, he’s a striker. They are players of quality and we will see.”