It has been revealed that Alexis Sanchez’s girlfriend is being blamed for his flat performance in Arsenal’s defeat to Manchester United. 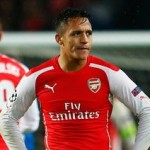 Chile’s La Cuarta revealed that the former Barcelona star paid the price for travelling across the world for international games against Venezuela and Uruguay.

He then immediately returned to Arsenal training before spending ‘quality time’ with girlfriend Laia Grassi.

It’s claimed Sanchez is fatigued and likened him to a cat who could be beaten in a sprint by a tortoise.