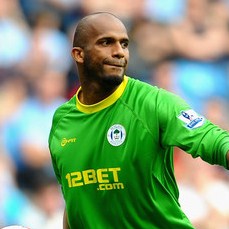 Wigan Athletic goalkeeper Ali Al Habsi has revealed he could’ve signed for Manchester United if not for work permit problems.

Al Habsi was discovered by John Burridge, the much-travelled veteran English goalkeeper and coach who was working with Oman’s senior squad.

“John Burridge said he wasn’t going to leave me until he’d put me in the Premier League. When I was 18 he brought me to England. I trained with Bolton and had a trial with Man United,” he told the Daily Mail.

“He took a picture of me at Old Trafford. He said, “It’s to remind you, Ali. You will play here and you will be a star. When I played there for Bolton, I got man-of-the-match and John was there. It was brilliant.”

Burridge paid for the trip, such was his belief in Al-Habsi. Sir Alex Ferguson wanted the youngster, as did Kevin Keegan at Manchester City and Sam Allardyce at Bolton, but work-permit problems meant that he headed for a three-year stint with Lyn Oslo instead.