Reports are out claiming that former Real Madrid striker Alvaro Morata is delighted with his move to Juventus. 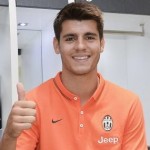 The Spanish U21 international has arrived from Real Madrid for €20m.

“I came to this club because it is one of the most historically great in Europe and the world, without doubt the best in Italy,” said the 21-year-old forward who will wear the Number 9.

“I chose Juventus because they chose me and showed interest for such a long time. I can work well here, it’s a magnificent club and I can do well.

“Carlo Ancelotti wished me all the best and said I am going to a great city. He said to enjoy Italy and especially the Italian food!”

Conte resigned two days into pre-season training to make way for Massimiliano Allegri, so did that affect his choice?

“I spoke to Allegri today and I am very eager to start work. I had known I wanted to come to Juventus for a long time. The club always confirmed its interest in me and the important thing is that I have the confidence of the people here.

“I had interest from England and other countries, but I had my heart set on Juventus and Serie A is without doubt one of the best Leagues in the world. I know it will be very tough, but I have prepared to face it and am ready to do my best.”

Cristiano Ronaldo the next target of Real Madrid