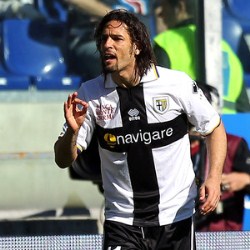 According to the agent of Amauri, the Juventus striker has emerges as a transfer target for two English Premier League club.

The 31 year old Italian striker spent the last six months on loan at Parma from Juventus.

Amauri has also emerged as a target of Napoli and Lazio this summer.

“We have offers from two Serie A clubs and from two English clubs. We will calmly make a decision.”

The former Palermo striker is under contract with Juventus until June 2012.