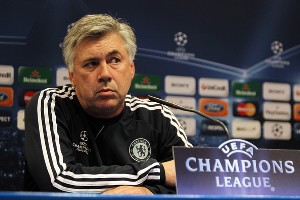 Chelsea boss Carlo Ancelotti insists he can handle the pressures of the final title run in.

Chelsea boast a one-point lead at the summit but would be overtaken by Manchester United if they beat Tottenham at home tomorrow.

Ancelotti is determined to remain calm with three matches left and may even go to the cinema instead of watching United’s game.

“Stress is the engine of life for me. You have to cope with the pressure, the stress,” Ancelotti said.

“That’s why rather than watching the game, it’d be better to go to the cinema. I don’t know what’s on. There are fantastic films on, maybe I will go and watch ‘Clash of the Titans’.”

The Italian admits his squad are beginning to feel the heat as the title run-in reaches its climax, but he insists such anxiety is normal considering what is at stake.

“The players feel the pressure now because Chelsea are very close to winning the title for the first time in three years,” he added. “They are very close and, maybe, they feel more pressure.

“But this is absolutely normal. It’s better to have this than to stay 10 points behind and not have anything to play for.

“We have a great possibility, a great opportunity to win and so we have to stay calm, quiet and have to prepare well for the games until the end of the season without emotion.

“We have to stay very composed, focused and concentrated because we have three important games. Every game could be difficult, but we have a very big opportunity to win. We don’t want to miss out on this chance.

“We are one point clear and that could be enough, that could be an advantage. The title is in our hands. We are not interested in the results of the other teams. We need to win the three games to bring the title home.

“Stoke are a dangerous team. They use a lot of throw-ins and free-kicks, they are a strong, physical team.” Barcelona President Bartomeu : I’m Sure Fabregas Will Be Happy

I Am Feeling Good! – Fernando Torres