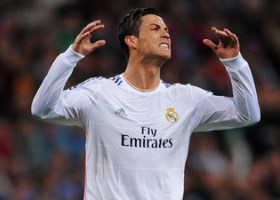 The former Manchester United star was a major doubt for the game at the Mestalla and Ancelotti explained at his pre-match press conference that the Portugal international will instead focus on being fit for the first leg of the Champions League semi-final against Bayern Munich next week.

The Italian said: “Cristiano is not available because we don’t want to take risks and we have other very important games this season. He will do individual work (on Wednesday) and then travel to watch the game.”

The Italian has been criticised for not resting Ronaldo earlier in the campaign to prevent him from getting injured at the crucial stage of the season, but insisted: “I don’t think that would have changed anything. With him or without him in the team, we have the same idea of how we want to play.

“Cristiano didn’t rest because he didn’t need to rest. There was no situation where we saw him being too tired. At this stage of the season, many players have this problem and we have taken as much care with him as we have with all the other players.” Gareth Bale Delighted To Be Playing Alongside Cristiano Ronaldo