Real Madrid boss Carlo Ancelotti has revealed that Gareth Bale will be fit for the Champions League final on Saturday. 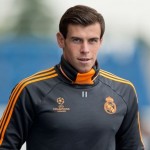 The Welsh international star, who has scored 21 goals in his first season at the Bernabeu despite being affected by various injuries, Ancelotti said: “He’s done specific work in the gym. He didn’t need to come out on the pitch in today’s session.

“There’s no problem, and I think those two (Bale and Ronaldo) are going to be able to play.

“He had a problem initially, but when he found his best physical condition he was a very important player with good numbers in goals and assists. He’s very important for the team and it will be the same in the final.

“He’s very motivated because it’s the first Champions League final in his career so I’m sure that he’ll have a great game.” Man Utd To Sign Ronaldo for £55m thanks to Chevrolet