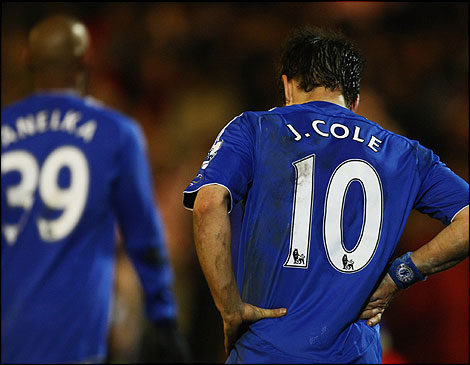 Chelsea boss Carlo Ancelotti has declared that he hasn’t forgotten about England star Joe Cole, as the player continues his comeback from injury.

Joe Cole watched on the sidelines as Brazilian coach Luiz Felipe Scolari was sacked before Guus Hiddink stepped in as temporary coach and led the Blues to an FA Cup final triumph.

Now new coach Carlo Ancelotti has maintained that Joe Cole has a important role to play this season for the Blues.

Ancelotti told reporters that he loves football and therefore he knows everything about Joe Cole. He also said that he knows all about the top players and Jo Cole is perfect to play behind the strikers and has the maturity.

Ancelotti also added that Cole is very good at playing in a small space and is a good dribbler and stated that he will wait until Joe Cole is recovered from injury and then try him.

Ancelotti has employed a diamond formation in midfield during Chelsea’s pre-season tour of the US and is confident Cole can slot into the system.