Reports are out claiming that Manchester United midfielder Ander Herrera has urged the team to produce earlier goals in matches for the good of the supporters. 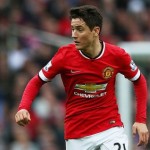 The Red Devils needed an 89th-minute winner from Ashley Young to edge Newcastle United 1-0 at St James’ Park on Wednesday and although Herrera was delighted to get a win, he feels United need to make the most of their opportunities in the prior stages.

“I think we deserved to win. We deserved to score before and we were a little bit disappointed at half-time because we should have been winning,” he told MUTV.

“We created chances, we kept the ball, and we didn’t give a lot of chances away – I think only one in the first half, in the last minute. But now we are very happy.

“When you win in the last minute you are very happy. But I think we have to improve, we have to score earlier, because our fans are suffering too much!”