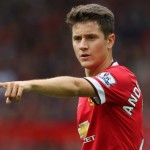 Reports are out claiming that Ander Herrera is expected back for Manchester United at Stoke City this week.

The Spaniard is set to hand Manchester United a welcome injury boost ahead of the New Year’s Day trip to Stoke City.

The £30m summer signing from Athletic Bilbao has been out of action since the home game with the Potters back on December 2, but the 25-year-old is ready to hand a decimated squad a timely pick-up by returning to action against Mark Hughes’ side.

“Ander will be coming back this week,” confirmed manager Louis van Gaal after their 0-0 draw away to Tottenham on Sunday.