Reports are out claiming that Ander Herrera is weighing up his future at Manchester United. 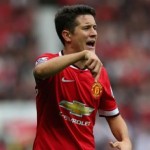 The Daily Express reported that the Spanish midfielder could leave Old Trafford as early as January.

The 25-year-old has played five times in the league but four of his appearances came within the club’s first six games.

He suffered an injury in the 2-1 win against West Ham at Old Trafford at the end of September and has play just 45 minutes since – in the 2-2 draw with West Brom.

Reports in Italy suggest Herrera could leave the club in January to make way and clear up some funds.