It has been reported that Anderlecht legend Paul van Himst has urged Youri Tielemans to ignore Premier League interest. 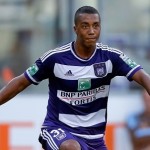 The midfielder is being linked with Manchester United and Chelsea.

“He needs to win the Golden Shoe [awarded to the Pro League’s best player] to be ready for [a transfer] abroad,” said van Himst.


Carlo Ancelotti Has Pop At Rafa Benitez over Karim Benzema