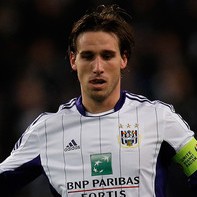 Interesting transfer news are out claiming that Arsenal and Liverpool have been alerted to the availability of Anderlecht midfielder Lucas Biglia.

The Daily Mail claims that the 26-year-old has been closely tracked by both Liverpool and Arsenal over the last year, while there has been further interest from the likes of Real Madrid and AC Milan.

Biglia, who spent much of the summer touting himself around Europe, is valued at around £8.5m by his club.

Speaking to Italian press, general manager Herman Van Holsbeeck said: “We have not formally received an offer for Lucas but we know that his agent is making moves in the transfer market.

“Biglia has two and a half years left on his contract and we would only consider letting him go if we receive an offer of €10.25m. He won’t leave in January for a penny less.”