It has been reported that Manchester United have told goalkeeper Anders Lindegaard that he can leave the club this summer. 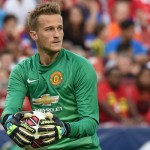 Lindegaard has only managed to feature on the peripheries of the United first team and despite rumours of David de Gea’s exit continuing, the Dane is considered surplus to requirements.

Since joining the Red Devils in 2010, Lindegaard has only featured 29 times for United and is likely to move away from the Premier League.

The transfer could see United push ahead with their proposed pursuit of Ajax’s Dutch keeper Jasper Cillessen as the rumours of de Gea´s departure to Real Madrid rumble on.