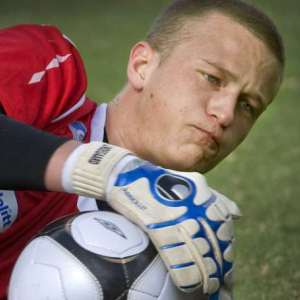 According to The Daily Mail, Manchester United boss Sir Alex Ferguson has stepped up his bid to win the race for top-rated keeper Lindegaard by having him watched in international action on Friday night.

It is believed that the Denmark international has moved to the top of Manchester United’s list of prospective replacements for veteran Edwin van der Sar and again impressed in a 3-1 defeat by Portugal at Porto’s Estadio do Dragao.

It was new Portugal coach Paulo Bento’s first home win in charge, but United’s scout was more interested in how Lindegaard stood up to a bombardment led by Cristiano Ronaldo and Nani, who shared their side’s three goals.

Though Thomas Sorensen’s extra experience earned him the nod in the starting line-up, the Stoke keeper picked up an injury and hobbled off after only half-an-hour. That was the cue for Lindegaard to step in and underline his credentials with a flying save from Nani just before half-time.

Ferguson sent his goalkeeping specialist Eric Steele to run the rule over Lindegaard in a Norwegian League game, for Aalesunds FK against Stabaek a week earlier, and is sure to receive another encouraging scouting report after the 26-year old’s latest efforts for his country.