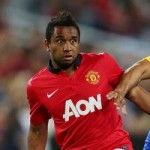 Manchester United midfielder Anderson has admitted that he is desperate to prove himself at Old Trafford.

The 25 year old Brazilian international mi is starting his seventh season at Old Trafford, yet for the majority of those he’s been frustrating to watch.

“I never asked to be injured, I don’t want to be injured. I want to play every week for Manchester United, I love being here.

“Last season I was doing good for six games, then I started to feel my knee. I felt the pain but I kept playing because I wanted to help my team, but then I had to stop playing. I felt like I was making a step forward and two back. Just when I think everything is fine I get an injury.”