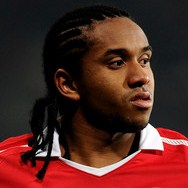 Gabriel Obertan gave United an early lead, which was cancelled out by City midfielder Abdi Ibrahim.

Anderson’s introduction at halftime changed the game, when he scored on 71 minutes against the run of play.

The Brazilian then scored again eight minutes later when his shot deflected off Ibrahim’s challenge and beat City keeper Loris Karius to seal the points.