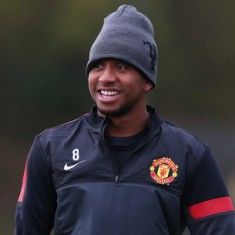 According to reports from SkySports, Manchester United midfielder Anderson will be sidelined until after Christmas with a hamstring injury.

The 24 year old Brazilian limped out of the Reading last Saturday after being substituted at half-time.

The former Porto player had been enjoying a good run of form in recent weeks.

Sir Alex Ferguson Delighted With The Form Of Jonny Evans