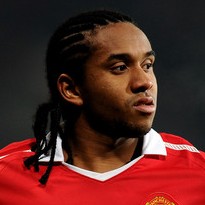 Good news for all Manchester Untied fans as it has been revealed that midfielder Anderson has signed a new contract with the club.

It is believed that the new contract will see the Brazilian star stay with the Red Devils until 2015.

“He has fantastic potential at only 22 years of age, he is going to be a really top player.”

On his part the midfielder said : “This is the best club to be at,”.

“I am looking forward to winning many more trophies with this club and I am so pleased to have signed a new contract.”