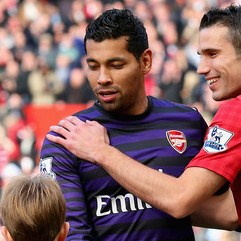 Andre Santos has apologised to Arsenal fans for accepting Robin van Persie’s shirt at halftime of defeat at Manchester United.

The 29 year old Brazilian international left-back was slammed by supporters and boss Arsene Wenger for taking RVP’s shirt at half-time of Saturday’s 2-1 defeat to Manchester United.

Santos declared to The Sun: “I’d like to apologise to supporters who felt aggrieved by it.

“Did I think it would cause such a commotion? Of course I didn’t, otherwise I would have told Robin to exchange the shirts away from public view.”