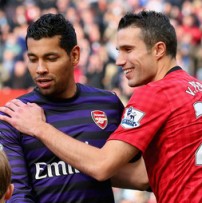 Arsenal fullback Andre Santos and Manchester United striker Robin van Persie found themselves in a bit of an embarrassing situation at half-time when the teams were walking out of the pitch and into the dressing room.

Santos ran up to Van Persie and after an exchange of words, the Dutch striker took off his jersey and handed it to the Brazilian who most probabbly thought that he would not be returning in the second half of the match.

Whatever the case may be, it was rather embarrassing and both players returned for the second half and continued with the match. Check it out.