It has been reported that Chelsea attacker Andre Schurrle is looking forward to locking horns with Arsenal’s Germans today. 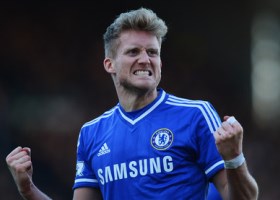 The German international star knows how important it is to fans to beat the Gunners.

The former Bayer Leverkusen star told chelseafc.com : “It’s a London derby, but I guess you could also call it a bit of a derby for the Germany players too,’ said Schurrle with compatriots Per Mertesacker and Lukas Podolski in mind. It could have been more were Mesut Ozil not injured,”.

“They are guys I know well, all good friends, so it’s going to be interesting – especially when you look at the situation in the league table and how close it is.

“Derbies, especially for the fans, are very important, which then makes it important for us to make sure we win it for them! We want them to be able to walk through the city and then when they see a Tottenham or Arsenal supporter they can say, “Oh, we won against you!” It gives them a better feeling.”