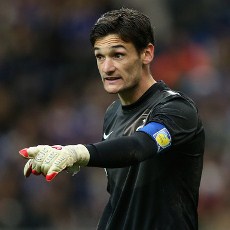 Villas-Boas defended Lloris’ part in the gaffe, saying: “Sometimes things happen like this.

“It happened to us at Chelsea. It’s mistakes that make you evolve as a player and I have no problem with that.

“It could happen to any goalkeeper during any game. It will not affect my decision-making.

When asked what he thought of the France manager’s criticism, Villas-Boas pointed to his head and said: “It goes in one ear and comes out the other.”