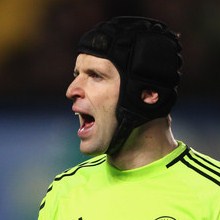 Chelsea boss Andre Villas-Boas is confident that goalkeeper Petr Cech will be fit for the weekend.

Cech was forced off at half-time of the third-round tie at Stamford Bridge after suffering a head injury in a collision with Orlando Sa.

Villas-Boas revealed Cech had been given the all clear.

“Petr went for a scan in the hospital and he’s okay,” he said.

“He felt a little bit dizzy from the early concussion at half-time.

“We decided, and he decided as well, it was better not to take risks.”