Argentine international winger Erik Lamela produced his best performance in a Tottenham shirt in the 2-1 Europa League win over Sheriff Tiraspol on Thursday night which put the club through to the Round of 32. 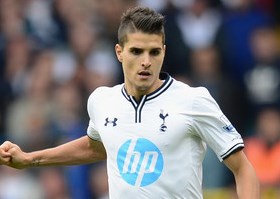 The former Roma star scored his first goal for the north London club and winning the penalty which was converted by Jermain Defoe to double their lead in the 67th minute.

Spurs boss Andre Villas-Boas spoke highly of the impressive display from the from the 21 year old.

“We were waiting for a good performance from him and I think we got it today,” AVB said.

“We have been patient with him and he has delivered with a game in which he had no fear, took people on and created a lot. We saw some signs for what he can do for us and hopefully now he can progress.”

William Gallas To Wear No.13 At Tottenham Hotspur