It has been reported that Juventus midfielder Andrea Pirlo goes into Italy’s World Cup clash with Uruguay expecting victory. 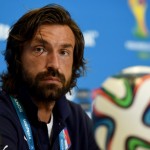 The Azzurri need a point to reach the knockout phase.

“Am I worried? No,” he told a Press conference.

“We are all aware that this is a crucial match, but we are equally aware that we are a strong team with destiny in our own hands.

“It would be a big disappointment for me and for the whole team to go out now, but it is not something we have thought about.

“We are preparing to go through to the next round. Leaving [the tournament] hasn’t entered our minds.

“Hopefully we will see a different Italy – not the same one that we saw against England or Costa Rica.

“We want to impose our game on the opponents. We won’t play for a draw.”