It has been reported that Andrea Pirlo has left the door open to a move away from Juventus. 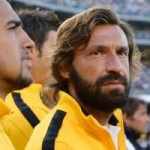 The 24 year old Italian international playmaker will be out of contract at the end of the season following his Bosman free transfer from Milan in 2011.

“I’ll certainly play on, we’ll just have to see where,” he told the Gazzetta dello Sport on Friday.

“I’ve already spoken to the club and we’ll meet again at the end of the season.

“Juve are my priority, but I don’t want to be a weight for anybody. The years go by, but it is not written that I have to stay here just because I am called Pirlo.

“I want to feel important and a part of the side’s success, otherwise I’ll leave. But I want to underline that it won’t be a problem about money or choosing between one club and another.

“If I had to change, perhaps I’ll go abroad. I’ll certainly continue playing for a high level team.”