It has been reported that Chelsea defender Andreas Christensen could be on the move this summer. 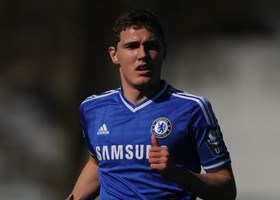 The 18-year-old is regarded as one of the best young players in Chelsea’s youth academy, but has yet to break into the first team.

“We are forced to think about Andreas’ future and progress,” his father Sten Christensen told BT.

“From our point of view, something needs to happen after the summer.

“Whether it is in the first-team squad or something different, we have to consider. He should not spend one or two years where he stagnates. Andreas will not go on loan.

“He has been at Chelsea for two years, but needs to be there for three consecutive years to be what they call ‘home-grown’. Chelsea will not let him go.

“I have talked to his coach Dermot Drummy, who said that Andreas is ready for the next step.

“He would like to keep Andreas, but as he said, for Andreas to progress, he needs to take a step forward.

“Therefore, I need to have a meeting with Chelsea. In case they don’t want to offload him, then they have got to do something to give him a challenge all the time.

“It’s a matter of his future progress as a footballer.”