Andreas Pereira Proud To Be Part Of Manchester United It has been reported that Manchester United midfielder Andreas Pereira was delighted to be part of this week’s friendly win over Barcelona. 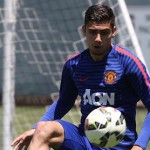 The Brazil U20 ace came off the bench to help United to a 3-1 triumph.

He told fans in a Facebook Q&A: “It was great! You always look forward to playing against big teams like Barcelona and it was a good feeling to come on against them. I remember almost as soon as I got on the pitch I played the ball out wide and we scored straight away. I was impressed! I know it’s only pre-season but the win was good for the team’s confidence.

“Honestly, I’m very proud to be a Manchester United player. I’m really happy I can play for such a big club. Every time I pull the shirt on it’s special for me. I realise every time I do it that I play for the biggest club in the world. Of course there is a bit of pressure as well because you know the fans out there want you to win and it’s up to you to make it happen. But that’s United and it’s normal.”