It has been reported that Barcelona midfielder Andres Iniesta is wary of Manchester City’s David Silva ahead of this week’s Champions League tie. 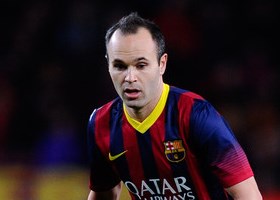 The reigning Spanish champions are at the Eithad for the first-leg.

The 29 year old said : “Many of the players at Barcelona know David Silva very well. It is very simple – he is one of the best and most intelligent players in the world. It will not be an easy job keeping him quiet – but it is something we must try and do,”.