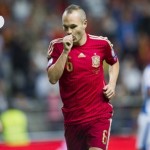 It has been reported that Barcelona midfielder Andres Iniesta would have liked to have seen Victor Valdes with the Spain squad this week.

“I would have liked to see Valdes here because he’s been in a difficult situation for a while,” said Iniesta.

The pair grew up together at Barca.