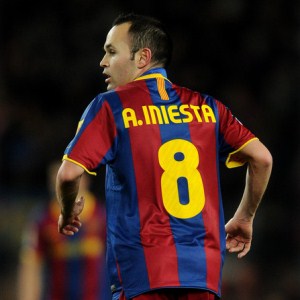 Barcelona star Andres Iniesta has declared that the Spanish giants are not lay down favourites for their Champions League clash with Arsenal.

The Spanish international declared: “We are not a machine. It won’t be easy. This isn’t a walk along the promenade for us.

“But Barcelona never take the field looking to be arrogant. That would be an enormous error.”

Arsenal drew 2-2 in the quarter-final, first leg at the Emirates last season before Lionel Messi clobbered them with all four goals in a 4-1 Nou Camp demolition job.

Yet midfielder Iniesta admitted: “People speak about the matches last year but things are completely different.

“No two games are ever the same and we are aware Arsenal will be very motivated this time. That makes them even more dangerous.

“Barcelona aren’t invincible and going to London is risky.

“We can win the first match but we face a battle to stop Cesc Fabregas and a team which will want to show its very best against us.”

Messi : Mascherano Would Be Great For Barcelona! Guardiola : Adriano Is Free To Leave If He Wants!