It has been reported that Barcelona midfielder Andres Iniesta says he finds protests against the World Cup by local Brazilians as “strange”. 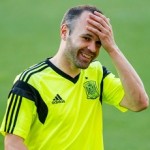 Locals are unhappy with the amount of public money being spent on the World Cup.

The Spanish international playmaker said : “It’s the World Cup in the country of football, and there’s nothing more beautiful than that. They should all be celebrating,”.

“It’s not my position to make judgements about others, especially about the problems in Brazil. I’m just saying that it seems strange to me.”

Ronaldinho : Ibrahimovic Signing Will Be Perfect For AC Milan