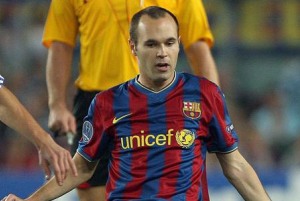 Great news for all FC Barcelona fans as midfielder Andres Iniesta has signed his new contract.

The Spain international midfielder has extended his contract to 2015 and also seen his deal improved, confirmed Barca this morning.

Iniesta sees his agreement extended from 2014 to 2015 and along with better terms also sees his buyout clause raised to €200 million.

After Iniesta, Carles Puyol and Victor Valdes, next to discuss new terms will be Gerard Pique.