It has been revealed that Barcelona are facing a dilemma over new contract talks with captain Andres Iniesta. 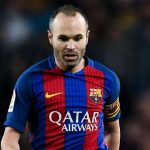 It’s emerged this week that Iniesta has postponed negotiations to the end of this season.

And Don Balon says the situation is now “a mess”.

Barca want a reluctant Iniesta to take a hefty pay-cut, with his current salary reaching a staggering €20 million – including bonuses – making him the second highest paid at the club behind Leo Messi.

Iniesta is upset with the demands, so leaving the talks at a standstill. Dejan Lovren Delighted To Be Linked With Barcelona