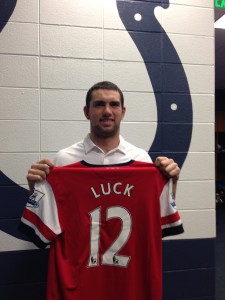 Andrew Luck, the former London schoolboy who has taken the NFL by storm in his first season, takes time to pose proudly with his own Arsenal shirt as he prepares to lead his Indianapolis Colts team to playoff glory this weekend.

The Indianapolis Colts quarterback, who became a fan of the round-ball game while living in London and attending the American School in St John’s Wood, will be keeping an eye out for the FA Cup results before leading his team into action against the Baltimore Ravens on Sunday evening.

“I remember watching a lot games when I was growing up in London and my love of football came from that time,” said Luck, who set a rookie record with 4,374 passing yards as he transformed the Colts from the worst team in the NFL into Super Bowl candidates.

“I am a huge fan of the Premier League and still watch as many games as I can to this day. I would love to get back over and watch some more live games in the future when my schedule allows.”

Luck lived in London when his father, ex-NFL quarterback Oliver, was president of NFL Europe. Luck senior recalled: “We attended a bunch of Premier League games while we were living in the UK – Arsenal, Spurs, Chelsea, Crystal Palace. I also took him to rugby league and rugby union games and he loved them. If he was pushed to pick a favourite UK team then he would probably say it was always the Gunners.”